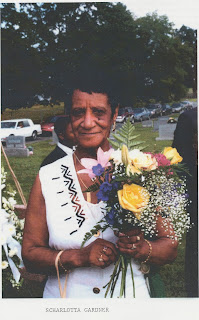 Scharlotta Gardner was born on 5/13/1930.  She was the daughter of Sally K.R. Gardner and Vons Morgan.  She was the granddaughter of William P. Gardner and Alice Sexton Gardner.   She was the great granddaughter of the Lewisburg lawyer Stephen Gardner.  She is mentioned in the 1938 - 1939 Official Minute Book for the Church School Secretary for the John Wesley Methodist Church (Scharlette).  In a telephone conversation with her on 7/28/2004 she indicated that she has no middle name; she is the mother of Jerome Ornell Crump, she is the sister of Doris Gardner Tilghman; Ernest J. Gardner; James E. Seams; Greta Ann Smoot Dry; Carlos J. Smoot; Mason C. Smoot, and Clementine Smoot Dry.  That she was a lifelong member of the John Wesley Church.  She indicated that she attended the Bolling School.  She stated that her great grandfather, Stephen Gardner was part Cherokee Indian; that she lived on Gardner Street in Lewisburg, W.Va. --- and that the street was named after her great-grandfather.  She said that Stephen was pronounced Stefan and that he was a free man during slavery times.  Stephen Gardner bred, raised and sold horses and that Dr. Montgomery is wrong when he asserts (in his papers) that Stephen Gardner was a physician.