I am writing this piece today, two days after my father's sister Edna has died at age 99.  I am not yet ready to memorialize Aunt Edna.  I will gather my thoughts and pictures and will do that soon.

I have, however, learned more about her great grandmother (my great great grandmother), Martha Jane Payne Haynes.  This information was gleaned from conversations and inquiries with a person at the Fluvanna Historical Society.  I have only bits and pieces but the information seems competent and matches a census that I have seen.  I plan to go to Palmyra in the Spring (hoping Covid will not restrict my travels) and I hope to find out more about Martha and her first "husband" Burton Payne.

The story appears to be that Burton Payne was the son of a male who possibly owned his mother.  Though Burton was of mixed race he was enslaved.  During slavery he had a "marriage" to Martha.  Two children were born to Martha though it is not clear if the first child, Socrates was his child. The second child was Albert who was clearly his child via oral history.  It seems that Martha and the boys were sold to a 22 year old schoolteacher named Elizabeth (Stone or Smith - I have the census somewhere - she appears in the 1870 census in Lewisburg, WV along with her mother).  They were transferred to Ms. S when Burton was away from the property.

On July 4, 1865, Martha married Solomon "Saul" Haynes.  She had a number of children before this marriage including my ggrandmother, Elizabeth.  I feel that Saul was too young to have been my ggrandmother's father.  All in all, Martha had about 7 children.  Martha and Saul went back to the Palmyra area after emancipation and can be found there on the 1880 census (working tobacco) - again I will have to verify this information.  However, Solomon is clearly Saul Haynes on the census and should be easy to find with his wife Martha.  The boys (young and older) are all living in one property, and Elizabeth is living with a neighbor.  Charlotte cannot be found after a certain period of time and she may have died young.  Burton's second wife was also named Martha.

I am writing all of this from memory and will go back and edit it and provide more info.  I believe that the second family of Burton Payne (and his second wife Martha) has done significant research on him but I have not yet seen this information.  I am not sure if they have a blog or if they publish their information in any form.

Posted by Carol Haynes at 1:24 PM No comments: 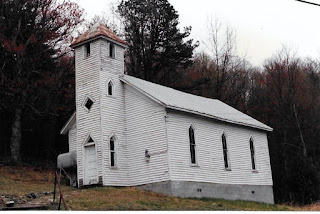 Posted by Carol Haynes at 7:34 AM No comments:

I am going through my boxes of notes from my WV research & will be posting some of my "notes" or other items that I collected over the years.
This first item was sent to me in an email by DC who was researching her family history.
It is a list of names of enslaved people that she had found in Wills.  It was her hope that someone might be able to use this information to find their family members.  So generous. 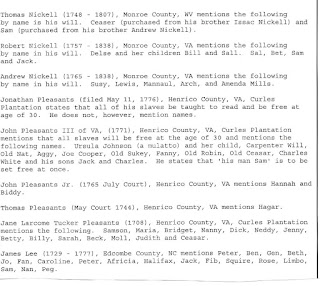 Posted by Carol Haynes at 7:26 AM No comments: 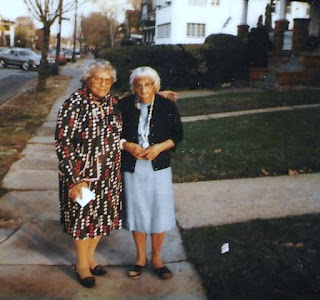 The Haynes family moved from Second Creek in Monroe County to Brushy Ridge, Greenbrier County at some point and it was there that George Washington Haynes & Elizabeth Jane Payne Haynes raised their fourteen children.  See Brushy Ridge Colored by Frank Peck (which is online).
This photo is of Edna Haynes on the left.  She married Dr. Robert Howard.  They lived in WV & the are buried in Beckley near her mother, Elizabeth Jane.  On the right is one of the older sisters, Nola.  Nola was impeccable. She always wore pearls.  She lived in Wheeling, WV at the end of her life.  While Nola was one of the oldest, Edna was one of the youngest.  Of all of the siblings I was closest to Edna and Daines.  I think Nola at the end of her life went over to live with her baby sister Berniece (a podiatrist) in Cleveland, Ohio.  Berniece had a huge home and she was a fan of sheltering her family - choosing to live in the attic.

Posted by Carol Haynes at 6:01 AM No comments:

Sorry - just moderated many many posts.

I appreciate all of the comments.  So sorry I have not published them sooner.
Posted by Carol Haynes at 5:50 AM 2 comments:

The Friends of Old Stone Cemetery have recently gone across the street to the Old Colored Cemetery / Dick Pointer Cemetery to help restore that cemetery as well.  They recently uncovered a Miller family and five graves of children which they lifted up to ground level.  I cannot express how much I appreciate their efforts.  They are also interested in the Sexton for Old Stone who was a Black male surnamed Bowyer.  They have restored his gravesite.  They are truly interested in cemetery restoration and should be applauded by their efforts.  My aunt Mary Ann Hughs and her brother James Littleton (though his stone says James Litton) are buried in the OCC/DPC.  Also, my grandfather's sister's husband Samuel Oscar Braddock is buried there.
Posted by Carol Haynes at 5:48 AM 1 comment:

Hi folks - family - WV descendants.
I am still alive and kicking (having managed CA for four years) but more than that I have become interested in the other side of my family.  The Cape Verdean side.  And I have been working on an index of CV' s which is now 1600 pages.  Sorry if I have not responded to comments etc.
But I WILL be back and do some housekeeping.  Also want to start two new blogs but am having problems navigating the settings on this site.
Posted by Carol Haynes at 8:27 AM No comments:

This photo
This photograph was taken by P.W. Poff. The Library of Virginia in an article about "A Guide to the Pocahotas, Virginia Carte de Viste" states (in part) that Perry W. Poff was born in Virginia about 1845.  He had a photography studio in Pocahontas, Virginia until about the mid 1890's.  Then he relocated to Mercer County where he opened a new studio.
In a future edit of this post I will leave information about W.P. Haynes. 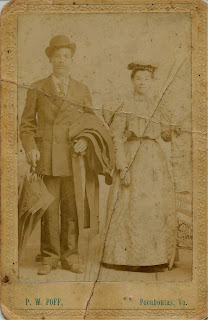