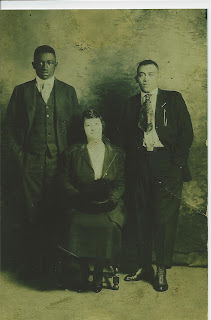 This photo was probably taken around 1919 in Lewisburg, WV. From the left is Enoch Ferrell, Dora "Jane" Kelly Knight Lee Haynes Midder, and William "Hubert" Haynes.
Jane and Hubert are my paternal grandparents.
After this photo was taken, (and I'm assuming this since she is not in the picture), Enoch married Jane's half-sister, Rachel Knight Ferrell (Goode Murdoch).
Enoch was born in Alabama in 1898.
In 1918, Enoch registered with the U.S. military and his World War I Draft Registration Card indicates that his name is "Enoch Ferrell", that he is age 21, that he lived at 21 Summers Street, Charleston, WV, that about his date of birth he says I "am not certain but am 21". He was born in Carson, Alabama. His father was born in Jackson, Mississippi. He was employed by Craig T. Anderson. His nearest relative was "Mrs. Mary Henley" of Mobile, Alabama. He signed with a mark. He was listed as being of medium height, stout build, one toe missing, dark brown eyes, and black hair.
He married Rachel Alice Knight in Greenbrier County (GC) on 5/3/1920. At the time of the marriage he was 22 years old and living in Kanawha. She was 18 years old, b. in GC. They were married at the residence of Rev. James R. Wills. In the marriage certificate he is listed as Enoch Ferrell.
Enoch appears in the 1920 census for Charleston, Kanawha, as a 22 y.o. b. about 1898 in Ala, roomer with Charlie Suntters.
In 1925 he appears in the Connecticut City Directory, in New Haven.
In the 1930 Census he appears in Rhode Island, East Providence, Black Male, b. about 1898, boarder with Festus (53) & Sianna (56) Wilson. In this census he is listed as "Enoch Farrell".
The Social Security Death Index indicates that "Enoch Ferrill" died on 8/19/1898, and that he was born on 3/25/1898 (he probably just assumed this date of birth later in life or maybe someone eventually told him when he was born b/c when he registered for the military he said he did not know his date of birth). His social security number was 035-10-2216.
I believe that his wife in Rhode Island was named "Marie".
Posted by Carol Haynes at 11:17 AM

This picture was taken around 1919 in WV. EF later moved to Providence, Rhode Island. Dora and Hubert moved to New Haven, CT.

Dora Jane is my great great grandma. I am the great grandson on her daughter Edna.