In the article "History of Brushy Ridge Colored" by Frank U.G. Peck he says "We will first consider the early settlers of Brushy Ridge, who they were & where they came from".  Peck mentions a man named Christopher Hoke who "owned a colored woman who became the wife of Samuel Wilmer".  (Note:   I do not yet know the identity of this first wife).  He goes on to say that Samuel Wilmer's second wife was Rachel Scruggs & that she was from Alderson.  (Peck uses two LL's in the name Willmer).  Peck then says that "G.W. Moore who owned a home and formerly lived in South Brushy Ridge is now married to Samuel Wilmer's widow".  Here he is referring to the fact that George Washington "Wash" Moore had married Rachel Scruggs.  Samuel Willmer (1825 - 1903) married Rachel Scruggs (1863 -   ) on 4/28/1881.  He was almost forty years her senior. Rachel married George Washington "Wash" Moore (1859-9/25/1942) on 12/24/1903, the same year in which her first husband, Samuel, had died.

Mr. Peck mentions a "Scruggs" - most likely male - who is part of the "transit (sic) population of Brushy Ridge".  I think he meant "transient".  Peck also mentions that "Oscar Wilmer married Mazie Haynes" & that "they live at J.D. Haynes".  This then, is where I make a connection - in family terms - to Rachel C. Scruggs as J.D. Haynes is James Daniel Haynes who was the younger half brother of my great grandmother Elizabeth Jane Payne Haynes Lewis (the s/o Solomon "Saul" Haynes & Martha Jane Payne Haynes Jones).

There is quite a lot of information to be found on Rachel C. Scruggs in Ancestry.com.  Note though that her daughter was also Rachel C. Scruggs (a twin of Raymond who was married to a Patterson) and they must be distinguished.  Also note that the name Bunderant pops up occasionally as it relates to Rachel.  This is probably b/c her stepfather's name Bundy is a corruption of Bunderant.  There ARE Caucasian Bunderant's in WV but I have not found any in Greenbrier County. 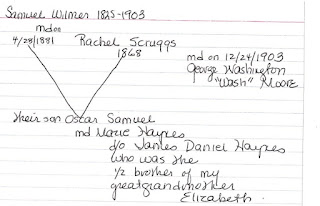 It should be noted that George Washington "Wash" Moore was the son of Samuel Nickell Moore "Big Sam" & Emily.  This compiler believes that Emily was a Haynes from Summers County but I have no documented proof of this and rather only "conversation".  This compiler's greatgrandmother (Haynes) was a seamstress at the same location (Nickell's Mill) as Big Sam (wagon driver) and Emily.

So -- what happened to all of Rachel's children who appeared in the 1910 Census?

Note that I just started working on this analysis a couple of hours ago and that it will be (substantially) edited, and information will be further corroborated and verified.   However, I wanted to get some skeletal info down as I had an inquiry from someone in this family over the holidays.  I seem to connect to Rachel C. Scruggs indirectly in a number of ways.  I think her middle name was Constance or that her daughter's middle name was Constance.  This also has to be verified with documentation.