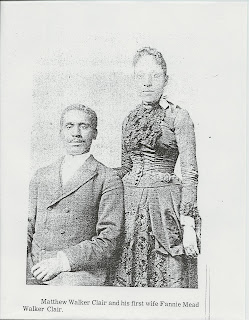 This writer discovered a red booklet on the shelves of the General Lewis Inn in Lewisburg, GC, WV in 2002. The booklet was called BISHOP MATTHEW W. CLAIR, A BIOGRAPHY by Dr. Margaret B. Ballard. I alerted the owner that the booklet (which was on shelves with old books and magazines) probably had some historical value. She was kind enough to allow me to take the booklet to the GHS where they made a copy for their files. When I returned the booklet to the Inn they said they would keep it in a safe & secure location.

Matthew W. Clair was the son of Anthony Clair & Ollie Green. He was the grandson of Peter James Clair, Sr. & Clorie Clair. He was born at Union, Monroe County (MC) in 1865.

The booklet mentioned some of the following things about Matthew W. Clair:

The Clair Chapel in Omaha, NE is named after him; he was the husband of Fannie Meade Walker of Baltimore who he married in 1889; he had five children with Fannie; his second wife was Eva F. Wilson & he married her in 1926 and they had no children together; there is confusion as to whether his middle name is Walker or Wesley; he attended Howard University and Boston University School of Theology; he died in Washington, D.C. though an historic marker in MC indicates that he died in Covington, KY; his grandparents came to MC from Richmond, Va. before the Civil War & they probably lived on the plantation of Henry Alexander (which property was later inherited by Alexander's daughter & her husband, William Gaston Caperton).

Bishop Matthew W. Clair may be the "Matison Clair" who can be found on the 1880 Census at MC, Union, Black Male, son of Ollie Green (40).

My name is Brent David Clair. After seeing a picture of Bishop Clair the resemblace of us has aroused my curiosity.

My name is Brent Clair also a descendant of Matthew Clair. I live in Chicago and look into this. I guess this means your husband and I are cousins!

I should have explained the relation: My grandmother was Jean Clair, her dad was James Rudolph Clair and his dad was Matthew Clair.

Steven Clair, father of Brent, my mother's name is Jean C. Clair was born in Hinton, W. Va. 1925? Her family moved to Charleston, Va. then to Washington.DC where I was born In 1947, Is that the same person as your grandmother?