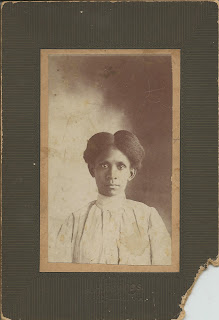 The back of this photo says "Mrs. Frank Dunsmore of Sinks Grove" and then it appears to have the directions to her home (... Ronceverte ... on road) but it is written and pencil and fading.
Mary "Janet"/"Jennette" Haynes Dunsmore was born on 7/6/1878. She was born to Socrates (Payne) Haynes (who was the brother of my greatgrandmother, Elizabeth Jane Payne Haynes Lewis) and Barbara Moore/Martha Moore Haynes. She was the wife of Frank Dunsmore and the mother of Ola and Overton Dunsmore. She was the adoptive mother of Bertie Constance Haynes (Dunsmore) Holmes. She was the granddaughter of Martha Payne Haynes (and possibly Burton Payne). She was the stepgranddaughter of Solomon Haynes and Peter Jones.
In the 1880 Census she appears in Monroe County, a mulatto female, age 3, daughter of Socrates Haynes (enumerated as Mary Jennett Haynes). In 1895, on May 17th, she married Frank Dunsmore at the Sinks Grove Baptist Church. The informant for the marriage was Lewis Nickell. The officiant was the Rev. O.T. Harris (enumerated as Janet). She appears on the 1900 Census in Monroe County, 2nd Creek, Black female, age 21, b. 7/1878, wife of Frank Dunsmore. She had one child, and that one child was still living. (enumerated as Jannett).
She appears on the 1910 Census in MC, 2nd Creek, as a black female, age 31, wife of Frank Dunsmore (she is enumerated as Mary J.).
She died on 8/19/1958 in Monroe County at Sinks Grove. She was 80y1m13d. By the time of her death she was a widow. Her death information indicates that she was the daughter of Socrates Haynes and Martha Moore. The cause of death was cerebral hemorrhage. She is buried at the Mt. Zion Cemetery (Sinks Grove/Neff Orchard Road). The informant was Overton Dunsmore of Sinks Grove.
In an interview with her relative, Mary/May Fay Dunsmore Johnson on 6/25/2002, she indicates that the true name of "Jennette" was Mary Jennet Haynes and that she may have had a brother named Edward. Ms. Dunsmore indicated that she had posession of a photo of Jennet with Edward in the corner.
Posted by Carol Haynes at 6:09 AM