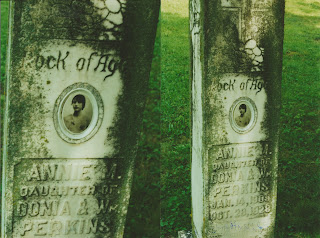 Profile:
Annie Matthews Perkins
There is a headstone at the Old Colored Cemetery in Lewisburg that has a photograph of the decedent affixed to the face of the stone. Placing a photograph on headstones appears to be a very common practice in some areas of Louisiana. For instance, there is a Black cemetery in Eunice, Louisiana where almost every headstone bears a picture. It really adds something, for me, when I see the images of the deceased and can attach a face to a name.
A couple of years ago a mentally ill woman from the New Orleans area was discovered in the possession of a great many of these headstone photographs. The local authorities confiscated her treasure and had to secure a large room in order to put the photos on display so that families could come and reclaim them. Hopefully many of these objects were placed back onto graves where they belonged.
I've only seen one photo on a headstone in WV and it is affixed to the grave of Annie Matthews Perkins. The photo reveals a pretty young girl whose complexion is very fair and who has dark hair and dark eyes.
Annie Matthews Perkins was the daughter of William M. & Adonia Avery Perkins. Her death certificate (WV DC # 12685) reveals that she died on 10/28/1928 in Fayette County when she was 19 years old. The certificate indicates that her usual residence was Lewisburg and that her death occurred when a C & O Railroad train struck the car in which she was riding at the Montgomery crossing (in Fayette). In a phone conversation/interview with my aunt (who is now about 84 years old) she indicated that Annie was traveling with three friends to visit another friend who was away at school & that they were struck by a train and they were all killed. The accident occurred at a time when my aunt would have been 6 or 7 years old. She remembers seeing the four caskets and says that it was all very sad. Accompanying the photograph is an inscription which reads "Rock of Ages".
Annie Matthews Perkins is a member of the Perkins clan, as was the aforementioned Annie Sidney Jackson Matthews. I'm not sure how they are connected/related. The Perkins family genealogist is a Mrs. Jarrett and her contact information can be obtained from the WV Division of Culture and History (where she has placed her work on exhibit). An article appeared in the Charleston paper some years ago about Ms. Jarrett and her work.
As to the value of visiting cemeteries, my trip to the Old Colored Cemetery resulted in a treasured photo.
More information about Annie Matthews Perkins can be found:
-- in a later post on this blog
-- at The Perkins Family History which contains the photo (see below)
-- in Black Residents of GC ... which contains a photo of the headstone (see below)
-- by contacting the WV Division of Culture and History regarding the work of Ms. Jarrett
Posted by Carol Haynes at 8:32 PM