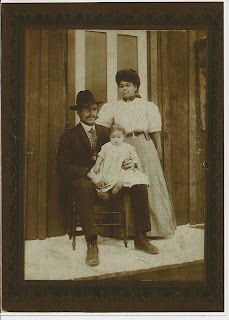 This is a photo of Samuel "Oscar" Johnson, his wife, Ethel Celina Haynes Johnson, and their daughter Eva Otelia Johnson Peters.


Profile:
Samuel "Oscar" Johnson
One of my favorite tasks (when I visit WV) is to visit the historic Black cemeteries. I take photos of the headstones & I include the photos in my work. I've had a few strange looks while taking the photos to be recopied at the local Office Depot. It does seem strange to find myself trampling through cemeteries, looking out for snakes, and snapping photos of graves. However, I've had at least one incident occur which made me realize that this aspect (the "gravestone aspect") of recording our history is very important. The incident was that on my first visit "Oscar"'s stone was standing (though leaning), the next time it was cracked on the ground, the next time is was covered by leaves and I had to use the tip of my shoe to unearth it, and the next time it was gone (buried too deep for me to get to it). (In 2010 I learned from a descendant that it is back up).
One drawback to exploring through old cemeteries is that I'm a city dweller and not sure about the habits of snakes. A friend of mine recently gave me a pair of Chippewa snake boots and that will, undoubtably, help when I go for my next visit.
Another drawback of spending do much time in cemeteries is that my family in WV would like to see more of me and, it is true, I should spend more time with my "alive" relatives. I had been in Lewisburg for about four days on my second visit there in 2002 when I finally saw my cousin Dottie. I hadn't seen her even though Lewisburg is a very small town. She confronted me with this fact by saying "I told Ma that I was going to have to go and lie down in the cemetery because that would probably be the only way I'd ever get to see you!!". She was half correct.

On the visit in 2002 I took a photo of the gravesite of "Oscar" Johnson. He is buried at the Old Colored Cemetery and his grave is on the corner which is furthest away from Carnegie Hall & a little back from the angle of the intersection. (I edited the above on 1/11/2011 but this is what I had originally written: "My 2002 photo depicted a headstone which is precariously leaning backwards but still quite a bit off of the ground. By 2005, the stone was laying on the ground, broken in two pieces, and covered with grass clippings and soil. I didn't have a camera on this trip (as I had made my way to WV while running from a major storm) nor did I have a trowel or anything to scrape the debris away from the grave. I tried to remove as much debris as I could with the tip of my shoe. I imagine that it will be only a matter of years before the pieces of stone are completely buried underground. Perhaps someone will get some money together for a cemetery reclamation program. I have a picture though, and it has been donated to the various WV archives (and can be found in Black Residents of GC ...)" end of old quote).

Samuel "Oscar" Johnson was the son of Emma Braddock Johnson Cooley. He was the half brother of Myrtle, Henry, Herbert, & Marion Cooley and Ada Virginia Cooley Ellis. He was the husband of Ethel Celina Haynes (who he married in 1906 when he was 21 and she was 19). He was the father of Eva & Lillian Johnson. His daughter Eva indicated (in an 8/7/2002 interview) that her father was a coal miner & she assumed that he died of the Black Lung. Samuel "Oscar" Johnson is reputed to be a descendant of General Edward Braddock (British Commander in the French & Indian War who commanded both George Washington & Daniel Boone). (Note: There was a Black Samuel Johnson from Greenbrier County who was an aide to George Washington & this Samuel Johnson could have been an ancestor of Samuel Oscar Johnson but I have yet to establish the connection).
Information on Samuel "Oscar" Johnson can be found:
-- in the Intelligencer, which is the newspaper for Wheeling, WV, see 12/20/2003 for the obituary of his daughter Eva Othelia Peters.
-- in Black Residents of GC ... (with a photo of Samuel, his wife Ethel, and his daughter Eva)
--death certificate which can be obtained from the WV Division of Culture and History (this dc is not on the website since their dc's for GC start in 1914 & he died in 1910).

Another plus in cemetery searches is finding the inscriptions on the graves. "She was too lovely, too fair to live in this life ...."
Grave placements can raise or answer questions. For instance, the aforementioned (see previous post) aunt and uncle of Eliza Ann Littleton Davis share the same headstone. My impression is that they were brother and sister. Their being buried together, however, begs the question of whether they were actually husband and wife.
Posted by Carol Haynes at 6:49 AM