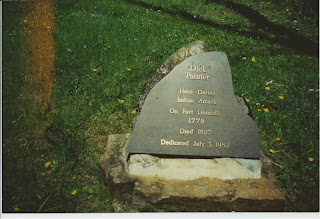 Profile:
Richard "Dick" Pointer
In a previous post I indicated that the Old Colored Cemetery in Lewisburg, Greenbrier County (GC) is now called the Dick Pointer Cemetery.
Dick Pointer is probably Greenbrier County's most famous Black citizen (maybe the most famous citizen Black or Caucasian). However, even though alot is written about the event that made him famous, there is not alot of information to be had about the man himself.
Dick Pointer, an enslaved man, was emancipated due to his bravery against Native Americans at Fort Donnally in GC in 1778. There are many published reports of what he did but, essentially, the story is that he was able to alert the small number of men in his fort to an impending attack by Native Americans.
Information about this event can be found at:
--Introduction to the History of the Colony and Ancient Dominion of Virginia - Appendix in the Southern Literary Messenger, Vol 14, Issue 1, pages 17-26, Richmond
-- http://www.rootsweb.com/~wvgreenb/history/history2.htm
-- The Historical booklet of Greenbrier County's 60th Anniversary 1778-1938 (published in 1938)
-- http://www.greenbrierwv.com/history.htm - An article entitled "A Frontier Hero & Later Freed Slave"
-- The Allegheney Frontier: West Virginia Beginnings 1730 - 1830 by Otis K. Rice
-- Historic Cemeteries of Lewisburg - a pamphlet published by the Lewisburg Visitors Center
-- Journal of the GHS - Vol 7, # 2, 1993, page 16 - an article by Ancella Radford Bickley entitled "Searching for the Historical Dick Pointer" as well as another article by Joan C. Browing entitled "The "Dick Pointer" gun".
-- Journal of the GHS, Vol 7, #5, 2003, p. 90, an article by M.J. Cabell entitled "Historical Sketch of Lewisburg, WV, - "Through the Looking Glass". "
-- Journal of the GHS, Vol 4, # 1, 1981, p. 61
-- History of GC by Otis K. Rice, pages 71 & 72
-- GC Pioneers and Their Homes, p. 227
-- http://wvculture.org/history/settlement/fortdonnally01.html which states "and when he died a natural death was buried in the colored graveyard in Lewisburg with all the honors of war - volley after volley was fired into his grave in token of the signal service he had rendered".
As to the man himself, we know that he died in 1827 and is buried at the Old Colored Cemetery. We know nothing of any wife. It is now thought that he had two sons. The existence of one of the sons , Henry, was recently (2006) the subject of an Appalachian Springs article (and see the actual court records which are housed at the GHS). A book by a gentleman named Laidley indicates that another son was captured and raised by Native Americans. I believe that this son was freed for some time but went back to live with the Native Americans and acquired rank with the tribe. (I do not have a cite for this and have not personally reviewed the book or article)
Dick Pointer was emancipated in 1801 & the emancipation papers can be found in the GC Deed Book # 2 at page 400.
Posted by Carol Haynes at 3:44 PM