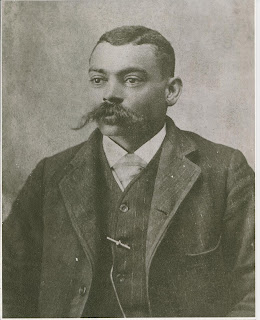 This is a photo of my great-grandfather, George Washington Haynes

Profile:
George Washington Haynes -
The Sinks Grove Colored Cemetery (also known as the Mt. Zion Missionary Baptist Church Cemetery & the Neff Orchard Road Cemetery) is located in the Second Creek area of Monroe County, WV. My grandfather, William "Hubert Henry" Haynes is buried there as well as his father, George Washington Haynes. I had been told by a genealogist who I had hired that, although records indicated that George was buried at this cemetery, he had no gravestone.
On a visit to WV, two of my aunts and I made our way over to the cemetery which is located on Neff Orchard Road. As expected, I found my grandfather's (Hubert's) grave. Next to his marker my aunt saw the corner of a stone jutting out from under a bush. I picked up a stick and (with some difficulty) moved the rigid leaves of the bush. I saw a few letters of the first name and the entire last name. I realized that we had found my greatgrandfather's grave. It was a low rough boulder with one smooth side on which his name was engraved. It was a headstone that I felt was fitting for a former carpenter and stonemason.
I'm glad that I visited the cemetery to recheck the information that I had received. While my paid genealogist had actually made the effort to visit the cemetery she had not located the stone. It was, actually, very easy to miss. Folks more spiritual than I might say that on my visit my greatgrandfather wanted to be seen.
George Washington Haynes was born in March 1860 at Brushy Ridge, GC to Mansfield and Eliza Haynes. He was the husband of Elizabeth "Lizzie" Payne Haynes Haynes (Lewis). He was the father of 14 children: Mattie, Albert, Gilbert, Hallie, Nola, Cora May, Ethel, Daines, Edna, William "Hubert Henry", the twins Kenneth & Keith, Cleo, & Mary "Berniece".
On the 1880 Census he can be found in GC at age 20, working as a stonemason. The following year, he married Lizzie on 4/28/1881. The wedding was officiated by (the Caucasian Presbyterian) Rev. Samuel Houston at the home of Martha Ann Payne Haynes, the bride's mother. Martha gave permission for the marriage and Lizzie's brother, Albert Payne (aka Albert Haynes) was a witness. George can be found on the 1900 & 1910 census records. He is mentioned in the article HISTORY OF BRUSHY RIDGE (see below) where it says "G.W. Haynes who married Elizabeth Haynes bought a home in South Brushy Ridge about 1884. he was a good (stone) mason working at his trade far and near. They toiled and struggled, built up a nice home and reared a large family".
George was born into slavery and he was probably owned by the Joseph/Henry/George W. Haynes family of Wolf Creek. (Note: Although the book History of MC indicates that William Haynes chastised the enslaved couple who later committed suicide, the Second Creek study (see below) indicates that the slave holder was Joseph Haynes)
George's granddaughter, Eva O. Johnson Peters, stated in an interview with this writier that she always thought of her grandfather as "the Dutchman" as he had straight hair, a fair complexion, & a handlebar mustache. I actually have a picture of my greatgrandfather & in this picture he has what I would call a medium complexion, a handlebar mustache, and the most amazing eyes.
Although he was a stonemason and farmer, his granddaughter, Eva, remembers his carpentry skills. She says that she remembers an outhouse that he built which was "a masterpiece". It had five seats, two high, three low, so that different ages "could go out together". She maintains that the seat tops had hinges so that everything was covered. In the same interview Eva indicated that her grandfather was a big tease. He would, for instance, pretend to be a bear outside of the window.
An earlier interview with Eva, on 7/31/2002, was an attestation to George's abilities as a farmer as Eva indicates that George and Lizzie grew every kind of apple on their land that you can possibly imagine. Eva was first introduced to asparagus at her grandparents house as they had an asparagus patch. They owned a wagon and despite the fact that they had 14 children they had enough produce to be able to take it to Ronceverte to the grocers and sell it. George's wife, Lizzie, was a seamstress at Nickell's Mill & Eva states that she "made everything that the little girls wore except their shoes".
In a 12/6/2002 interview with Eva, (who at the time was 96 years old & living in Wheeling, WV) she indicated that her Granny Lizzie had a (piano or organ) which was close to the front door. There were alot of instruments in the household, mostly banjos and guitars. On summer nights the parents and children would go out on the porch and play all of the songs they knew. They had no formal musical training & played music by ear. Eva indicates that the 14 children were of all colors and all kinds of hair. The twins didn't look alike. They didn't even look like they were brothers.
George Washington Haynes died in 1914. He had been walking on a train trestle when a train approached. He was not able to get to the end in time and was either crushed or thrown into the river.
More information about George Washington Haynes can be found at:
-- Greenbrier County Deed Book (? Vol 61)
-- WV Death Certificate # 8903 (as the father of the decedent, Kenneth A. Haynes - Raleigh 1937)
-- the booklet MC CEMETERIES - NEFF ORCHARD ROAD (BLACK)
-- MC Death Book
-- Marriage Certificate, permission slip, & witness slip can be found in Black Residents of GC ... (see below)

An idea for future research for this type of situation would be to obtain the death certificate. Also a search should be made to see if there are any newspapers describing George's accidental death.

One family has continuously maintained this Cemetery with some monetary contributions from other families & local churches.
Posted by Carol Haynes at 5:30 AM