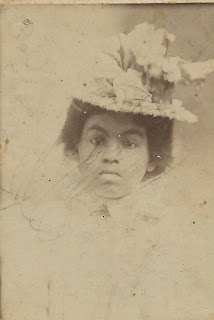 Ethel Celina Haynes Johnson Barnes was the daughter of George Washington Haynes and Elizabeth Jane Payne/Haynes Haynes Lewis.  She was born in 11/1887 (probably in Brushy Ridge, Greenbrier County).  She was the wife of (1) Samuel "Oscar" Johnson and (2) Roy Barnes.  She was the mother of Eva Otelia Johnson Peters and Lillian Rose Johnson Barnes Brooks.  She first appears in the 1900 Census in Greenbrier County at age 12 with her father George W. Haynes.  On June 28, 1906, at age 17, she married Samuel "Oscar" Johnson (who was 21y and born in Greenbrier).  Her husband "Oscar" died four short years later in 1910.  She died in 1954 (on an operating table) when she was age 60.  In a 7/31/2002 interview with her daughter Eva (Aunt Eva), she indicated that despite her mother's fourth grade education she was a very talented woman.  She could play the piano by ear.  She would perform in plays any chance she would get.  She could draw (with a pencil) very well and was especially good at drawing "the woman on the oatmeal box".  She moved to Wheeling and worked at a church.  In an interview with her grandson, Colonel George Peters, Jr. on 8/17/2004 he indicated that "a number of the Haynes siblings drifted into Wheeling" when he was still a child.  He indicated that each sibling had a cooking specialty.   His grandmother, Ethel, liked to bake and (though he was not able to remember the specific item which was her "specialty") she baked one of these items for him every day.  He indicated that all of the Haynes siblings cooked, even the men.  In an interview with Ethels niece, Edna Haynes (named after Ethel's sister Edna) the niece indicated that Ethel was "short".  The family naming pattern persisted and Ethel's younger brother, William "Hubert" named his youngest daughter Ethel (and she would, coincidentally, marry a man named Oscar).
Posted by Carol Haynes at 3:19 AM