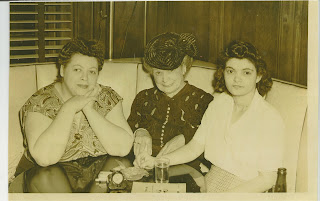 Lillian Rose Johnson Barnes Brooks was the daughter of Ethel Celina Haynes Johnson Barnes and Samuel "Oscar" Johnson.  She was the Wife of E.N. "Bud" Brooks and the mother of E. Brooks and M. Brooks.  She was raised in Beckley and Hinton, WV.  Born in 1908.  In an interview with her sister, Eva O. Johnson Peters, she indicated that as a child Lillie's hair was almost white (like compiler's & apparently common in the Haynes family) and she had blue eyes and that she resembled her aunt Dr. Mary R. Bernice Haynes Brown.  Aunt Eva was a major source of information to this compiler and gifted me with the above photo as well as other photos.
Virginia Braddock Hornaday Brooks (this compiler does not believe that there is a relation with the Brooks men married to these two women - just a coincidence & this fact was verified by Aunt Eva) was called "Jennie".  She was the sister of Emma Braddock Cooley and George Braddock.  She first married a Hornaday and then a Brooks.  See Larry Shuck's Greenbrier County Birth Records.
From oral family history (i.e. from Aunt Eva) - Emma Braddock Cooley, Virginia Braddock and George Braddock were the children of the son of General Edward Braddock and an enslaved woman (The slave woman would have had to have gotten pregnant in 1755 & had the child in 1756).  The mother of Emma, Virginia and George was Josephine.  Aunt Eva said that she didn't remember anyone "ever calling the name of  Josephine's husband".
There was a "famous" photo of Josephine (in an elegant Mona Lisa like pose) that has gone missing from the family but which Aunt Eva could remember vividly.
General Braddock arrived in America in 1755 and died not many months later but apparently in those months had time to father a child with an enslaved woman.  This son was the first of the Braddock line in the studied area.  Among General Braddock's command were (the future President) George Washington and 21 year old Daniel Boone.  (Note:  There was a blonde haired - blue eyed - but Black man named Daniel Boone in Brushy Ridge, WV - but I  have been told there was no relation to the famous Caucasian Daniel Boone).
Lillian and Aunt Eva (who are sisters) are descended from Virginia's sister Emma (who was their grandmother).  Emma's son was Samuel "Oscar" Johnson who is Lillian's father (Aunt Eva was not sure where the Johnson surname came from).  Lillian's mother is Ethel Celina Haynes (sister of compiler's grandfather, William "Hubert" Henry Haynes & daughter of George Washington Haynes and Elizabeth Jane Payne/Haynes Haynes Lewis.  (Coincidentally there was a Black man named Samuel Johnson from Greenbrier County, WV who was an aide to President George Washington but this compiler can make no connections to Samuel "Oscar" Johnson of Greenbrier County).  I have often thought that this would be a good research subject for the History Detectives.  Most of the men in this family became high-ranking military men (?coincidence).  Unfortunately we do not have an artifact - which is required for that television show.  Perhaps another genealogist will take on this search.
Celestine M. Curtis - I have not yet researched this individual.
Posted by Carol Haynes at 5:55 PM