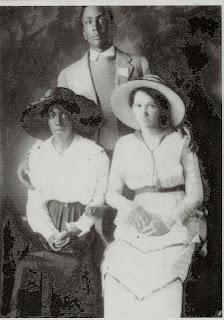 Randolph Kelly - Randolph Kelly was the son of Droa Spriggs Kelly (my paternal great great grandmother) and William Kelly.  He was the half-brother of Tom Spriggs (Kelly), Mary Alice Spriggs (Kelly), and Samuel Spriggs (Kelly), who were all the step-children of William Kelly and the biological children of Dora.  Randolph was born on 6/2/1892 in Williamsburg, West Virginia (however his death certificate states that his death is 6/6/1892).  He appears on the 1900 Census in Greenbrier County, Williamsburg District as a Black Male, 7, cousin of Elvira Huse (here it says he was born in December).  He appears on the 1910 Census in GC, Lewisburg District as a mulatto male, age 18, borther in law of the head of household, William Knight.  (His sister Mary Alice had married William Knight).  On January 19, 1919 he married Mary Alice Lee "Aunt Sis" (so he was married to a Mary Alice and had a sister named Mary Alice).  He appears in the 1920 Census at Lewisburg as a Black Male, age 27, with Alice (21), William Edward (infant) and Ed Jackson (10).  He appears ont e 1930 Census, in Lewisburg, as a Black Male, Laborer at a flour mill, with his wife, M. Alice Kelley (33) and his children William E. (10), Randolph K. (5), Mary V. (2), and Roy P. (infant).  His World War II Draft Registration Card indicates that he lived in Lewisburg, WV, was born on 6/2/1892 at Trout Valley, laborer at Peoples Supply Company of Lewisburg, medium height and build, brown eyes, dark hair.  In an interview with his granddaughter, Elizabeth, she indicated that there was another daughter, Mary Alice, who died young.  Randolph died on February 10 or 12, 1933 of pneumonia.  His occupation was cemetery caretaker.  He appears on WV Death Certificate #4793 & his own certificate WV Death Certificate #1803 which states that he died on 2/12/1933 at 40y, the maiden name of his mother was Dora Kelly, the informant was S.H. Kelly (his brother)  (Note - this is Samuel Kelly) buried in Lewisburg at the Lewisburg Cemetery.
Posted by Carol Haynes at 5:19 AM